The Current State of Web3 Music

In Part One of this series, we looked at a few of the major issues facing the music industry and explored some of the ways that web3 technologies could solve them. As the industry begins to experiment, we see it fragmenting into different areas of focus. This week, we’ll go into more detail about these use cases and take a look at specific protocols working to create the future of Web3 music. Then, we’ll examine a few ways that you can interact with the field today, and wrap up with a few predictions about where things go from here.

1A: Digital Audio Workstations: The Future of Production

The first protocol we’ve researched is Arpeggi, who is currently working on a Web3-native Digital Audio Workstation (DAW). DAWs are essentially the latest iteration of music production software. From using full blown studio grade-hardware, music production was democratised by the rise of DAW softwares (Logic, Pro Tools, Ableton, etc). These programs cost less than $500, and they enabled anyone with a personal computer to produce, mix, and master sound at a level that was previously only possible in a studio that cost $500 per day! 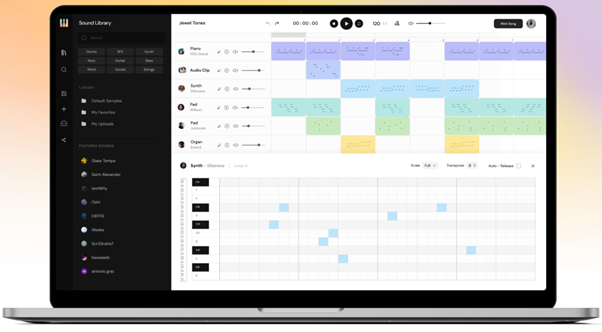 Arpeggi takes all this to the next level. It allows the art of music production to be a more collaborative process by using an online workflow, providing real time updates to all members of the production team. Think Figma but for music. What is especially interesting (and relevant to us) is the fact that they've enabled artists to mint NFTs straight from the DAW. This enables seamless minting not only of complete tracks, but also of individual musical elements (melodies, bass line, etc). Such tools are ideal to expedite the use of the composability benefits provided by NFTs in music. Moving us into a world where we can remix/sample music without sacrificing monetary compensation to the original artist(s).

1B: Web3 Digital Service Providers: The Future of Streaming

On the other hand, we have projects like Audius and Emanate reimianging how we consume music. Digital Service Providers (DSPs) like Spotify, Apple Music, etc. have taken over the way individuals listen to audio, and frankly, the user experience has never been better. But the fact remains: DSPs are just another avatar of social media platforms, who have collectively come under fierce scrutiny on their monopolistic practices. These range all the way for deplatforming to data exploitation.

Web3 DSPs, if we can call them that, are attempting to build a censorship resistant, permissionless, and transparent version of the Spotifies and Apple Musics of the world. By decentralizing the core pieces of the tech stack (File hosting, indexing, and delivery), and providing on chain insights into consumer behaviour, artists are provided a materially better value proposition – namely, a more data driven approach and a reliable platform on which to grow their audience. That being said, whether or not users will adopt such platforms is still to be determined, and this will be the determining factor for if these platforms will go mainstream or not.

And, as you can see in the image below, almost every other facet of the industry is also being experimented with. From tremendous activity in the distribution vertical of music with the likes of Sound.xyz, Catalogue, Royal (discussed further below), to even artist/IP management (through Web3 native agencies and labels like DOOMSDAY X, Hume, etc). Of course, a lot will be written off as an experiment, but the few that stick, have a chance of shaping the entire trajectory of the industry.

2: Music NFTs and How You Can Use Them 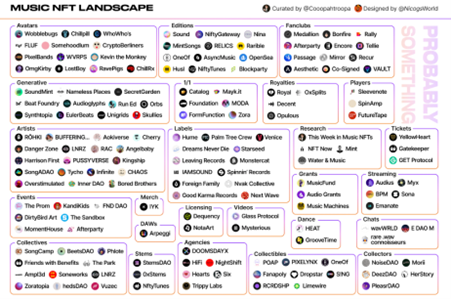 If you’re an artist or fan looking to interact with Web3 for the first time, there are a few basic courses of action that you can take. For one thing: research, research, research. Reading this article is a good starting point. But once you’re aware of all the tools and projects being built, you might want to get your hands dirty. Here are a few ways to do so:

These may be 1 of 1s, or part of a collection of similar NFTs (e.g. a first edition of a song being released in NFT format.) Platforms that offer this service of releasing NFTs for purchase include the likes of Sound.xyz and Catalogue. The existence of such platforms will provide the building blocks for artists to not only monetize their work, but also provide superior data insights into their fans.

Monetization in this case is quite straightforward – an artist launches their NFT collection to their early believers, which can finance the production of future work. In terms of fan data, the on-chain nature of NFTs allow the artist to see who purchased their NFT, when they did so, if the current holder is the same as the one that originally made the purchase, where the purchase was made, and so on. Such insights allow artists to segment their fans and hypertarget them. For example, if you know who purchased your genesis NFT at mint, you can be fairly confident that this fan is part of your earliest supporters and you can reward them accordingly.

Minting or buying a music NFT which provides fractional ownership

This is a good way for artists to generate current cash flows by leveraging future royalty pay-outs, while fans who believe in the artist can capture the upside if the song or artist does well. A noteworthy platform that currently allows artists to mint NFTs that include this feature is Royal.

If DSPs like Spotify/Apple Music or Web3 native DSPs like Audius (after gaining traction) decide to integrate their services with such NFTs, we could very easily be living in a world where a not insignificant percentage of royalty streams (especially from indie artists) go to the artist’s fans. In this future, being a music fan would take on certain qualities of being an investor.

These are NFTs which have attached benefits to them. This could be allowing NFT holders direct access to the artist, access to specific gated content, rights to the NFT art – it could be anything, really. While the aforementioned platforms Sound.xyz and Catalogue can facilitate this function of NFTs as well, utility NFTs belong to a subset that extends beyond the world of music. Thus, such tokens can be accessed via horizontal marketplaces like OpenSea, Magic Eden, Rarible, etc.

It is possible to imagine a future where holders of Utility NFTs minted by music artists are allowed access backstage at concerts, access to limited edition merchandise, or even access to a 30-minute meet and greet with the artists. The possibilities are endless with respect to what the utility is and how it is granted to the NFT holder.

Worth mentioning is that these don't all have to be disparate use cases. A single NFT can, and often does, fit into more than one of these categories.

As of now, the most popular use case of music NFTs is that of collectibles. Quite underwhelming, given the immense potential this technology has to revamp the industry. For context about 85,000 songs are uploaded to Spotify per week, while less than 100 songs are minted per week in aggregate. But it’s a start, nonetheless.

In the long term, there are a few scenarios we expect to play out. These are probabilistic outcomes – no one can know for sure.

As we’ve seen with almost all industries, over time, consolidation tends to arise due to efficiency unlocks. We’ve seen this happen all the way from the oil and gas industry in the 1800s to e-commerce today. Similarly, we expect the same to occur amongst the various Web3 music projects. A case in point is the distribution channels. We have several marketplaces (Catalogue, Sound, Royal, etc), all essentially providing the same service – minting music NFTs. Granted, they are positioning themselves for slightly different use cases – Catalogue for one of ones, Sound for editions, Royal for fractional ownership, and so on.

However, we envision two possible outcomes:

While we can expect a significant volume of industry interactions to take place on-chain, there will still be the need for various middlemen as they are today. If a song is played halfway across the world, with differing level of technological maturity and differing copyright laws, it is likely that we will still require entities who are experts in the jurisdiction to correctly identify and pass along royalties back to the rightful owner.

As discussed earlier, Web3 is not here to replace Web2; it exists as a complementary layer. Thus, due to the massive UX unlocks by DSPs such as Spotify and Apple Music, it is unlikely we will see the adoption of such platforms slow. Their flywheel of onboarding the widest variety and highest volume of users is well under way. Such network effects are difficult to break.

Instead, a hybrid system is more likely to be on the cards. With the large number of eyeballs on DSPs, we foresee a future where Web2 plays a large role in music discovery and consumption, whereas Web3 plays a large role in artist monetisation. In terms of discovery, getting your song on to popular Spotify playlists or the Spotify homepage will remain prime real estate. And in terms of monetisation, the more streams you get on a DSP, the more valuable the artist’s NFT will become.

As mentioned earlier, a new class of financially aligned curators is likely to arise. Taking one step forward, it is possible that a collective of such individuals come together and form a DAO, scaling their activities to a larger degree. This particularly is something that Multicoin Capital is very bullish on.

Going back to the gaming versus music comparison, an important reason why the gaming industry blossomed relative to music was because of their approach towards copyright law. With the rise of platforms like Twitch, YouTube, and other social media giants, it was evident to all that user generated content (UGC) was the next frontier that would impact these industries. The difference is that while the large music stakeholders (primarily the labels) took an aggressively draconian stance on UGC, gaming embraced it. This antagonistic stance (stemming from Napster, LimeWire, etc.) towards smaller creators building on top of established creators is what eventually led to the demise of SoundCloud and led to a whole host of friction between artists, fans, and the labels. Web3 represents a second chance. It is imperative that copyright law is not exploited to a point that stifles Web3 music innovation.

This concludes our overview of the Web3 music landscape as it exists today. The industry is obviously at its absolute outset, and a lot of exciting developments will occur in the coming years. We look forward to tracking them and reporting back, and would love to hear your feedback or any other ideas you have. Feel free to contact us at @Frogsanon or @Genesisblockpod any time.