In this month's Macro report, we are taking a deeper look into manufacturers and the bullwhip effect to see if history offers any indication of what's to come.

Ghost of ISMs Past

The ISM Manufacturing Index (aka: purchasing manager index) measures the expansion or stagnation in an economy’s manufacturing business by surveying supply chain managers for their monthly activities. A reading of over 50 indicates an economy is expanding and demand is perceived to be ramping up. Under 50 suggests a contracting economy where demand is perceived to be drying out. When combining this with estimated future new orders (US Cycle Short-Lead), we get a nice picture as to which direction the economy is heading. 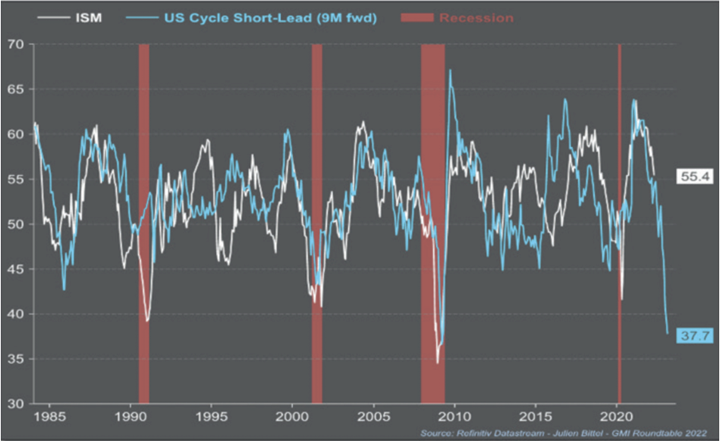 I don't think it needs to be said, but new orders are what drive our economy. Estimated future orders dropping that low is a clear indication that we’re hitting a recession. The chart above paints a rather ugly picture for ISM, with the US cycle short lead projecting the ISM to recessionary lows as demand collapses due to consumer spending habit changes.

In my past reports and on New Order’s Alpha drop, I have been warning of potential fallout in consumer demand given the change in spending habits the past two years. Seeing headlines of individuals making 250k living paycheck to paycheck isn’t a bullish indicator by any means. Real Personal Income’s YoY change this past year confirms this finding as well. 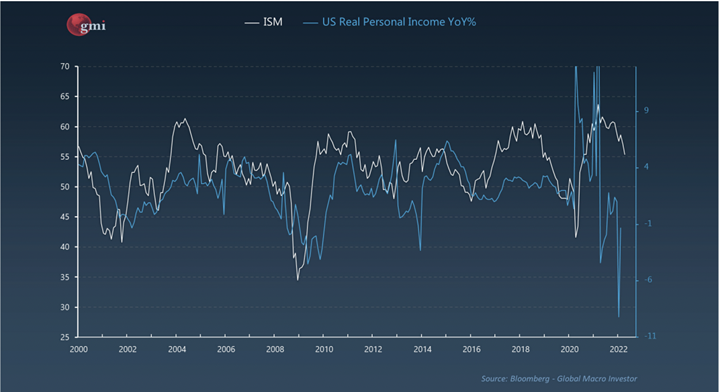 Much of the inflation we are seeing today comes from a supply chain effect known as the Bullwhip. It is when excess demand combined with supply chain issues creates inefficiencies between supply orders and the demand causing them. In English, there is a mismatch between when a product is wanted and when it is available, and this inefficiency gets continuously worse because the supply chain fails to adjust to the new norm. Here is a better visual: 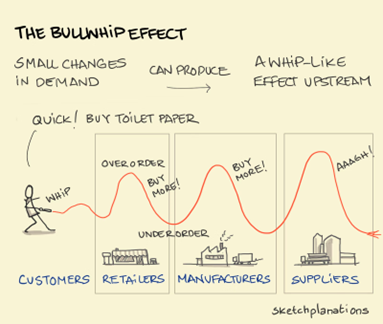 You may be asking: “Well, how did we get here?”

The answer to that is the 2020 pandemic lockdowns. These lockdowns caused a material shift in consumer spending patterns, and we saw an early effect of this when toilet paper ran off the shelves early on in the lock down. In this example, retail toilet paper was running low while institutional toilet paper had an oversupply. The reason for this is because prior to lock downs, a majority of people did their business at work. Once lockdowns hit, people were forced to spend that time at home, and thus the normal supply of toilet paper filling the shelves for retail was hit by a demand shock that wasn’t anticipated.

These types of shocks occurred in various areas of our supply chain during the two year lockdown. Managers during the period (cough cough, JP Morgan et. al.) insisted that things would return to the 2019-era norm. However, the unprecedented length of the lockdowns shifted spending habits to this new normal. Additionally, demand for these products were elevated to unsustainable heights thanks to all the stimulus, PPP loans, and monetary easing.

In Q3 of 2021, when retailers finally were catching up, they extrapolated that this consumer demand would continue and thus ordered new goods accordingly. On top of this, they did so while simultaneously increasing prices by 15%-25% in order to offset some of the restricted supply chains. However, once the Fed liquidity provisions stopped and consumer spending clearly began to falter (because no one was saving), consumers spending stopped and retailers were left with MASSIVE inventories. Some like Target, Ross, Walmart, and GameStop have said in earnings calls that it will take a few YEARS to get through it all. (GameStop in particular is writing off their inventory rollover in perpetuity, ouch). Thus, with inflated inventories and no demand, you can expect prices for goods to begin the downward leg of the whipsaw, effectively eliminating some of the inflation we have seen over the past year.

Now I know what you are thinking: “Does this mean my gas prices are about to whipsaw as well?”

Unfortunately, we have a bit of an exception here. This bullwhip effect works tremendously well with products that are not vital to running the economy, but oil is used in everything from fuel and heating to asphalt, plastics, and even make-up. Plus…

Early in June, Biden went to the UAE to grovel for increased production to help counteract the continued increases in the price of oil.

When Macron later talked with MBZ, he was informed that max capacity was sitting firmly at 150k barrels per day - 75% less than what Biden agreed on. This implies that the downturn of oil prices will be short term in nature as ever-mounting demand continues to increase. Additionally, the net effect means Biden is going to be forced to end his energy “war” with the Saudis and make amends if he wants to bring gas prices down for his base. Especially with reports of Russia only having to shut off production temporarily to send oil prices up to $380/barrel.

Telling it Straight: Will the Fed Pivot?

With prices for some assets down over 80% from their highs, a pivoting Fed would be a breath of fresh air from the monetary pressure of the past six months. However, I do not think we are in any place for it to happen and there are three reasons why.

On top of all this, the global manufacturing ISM is softening. When you key this in, along with softness in critical industries like semiconductors, it suggests that the rest of the year will see softer demand for several high end products, like mobile phones. This lower demand could mean lower ad spending within the industry, which could have a domino effect overall on tech. I continue to feel that the tech sector, or rather select companies within the tech space, are a tad fluffy and need to come down more for me to feel confident in a bottom. The plus side of this slack is the supplier lead times have shortened. This is potentially good news for supply chain bottlenecks, but when you look at it in the context of other factors, it is probably a negative factor for the next several months.

So when it comes to the question of whether the Fed will pivot, I think the long answer is yes. They will pivot at some point due to political pressures, even if inflation may still be running high. With that said, it’s difficult to have a lot of confidence in the current Fed. The same way they failed to predict this level of inflation and remained accommodative long after it was necessary, I think they will remain hawkish or pretend to be hawkish and will not be able to predict or stave off a recession. Given the Fed’s love for confirming trends with lagging indicators, this pivot will most likely come after a hard landing is reached. They will always be behind the curve, and their only chance at redemption will be the speed and magnitude at which they pivot, as this will dictate how long this recession lasts.

A glimmer of hope 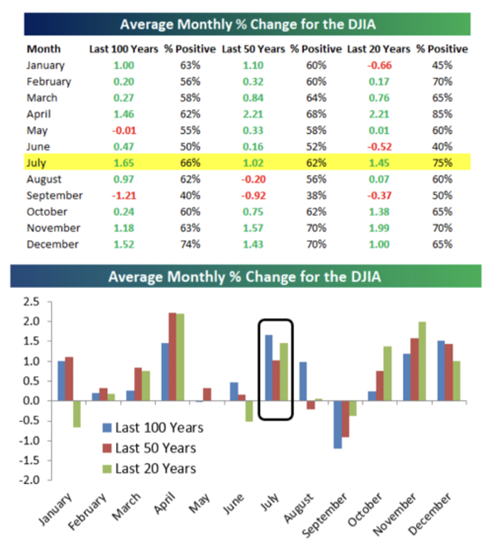 Crypto’s Place in the World

With the current view of crypto as a speculative asset, we could see some risk taking occurring over July as managers rebalance their portfolios, possibly pushing BTC up to its 200D MA at 28k before turning back down. 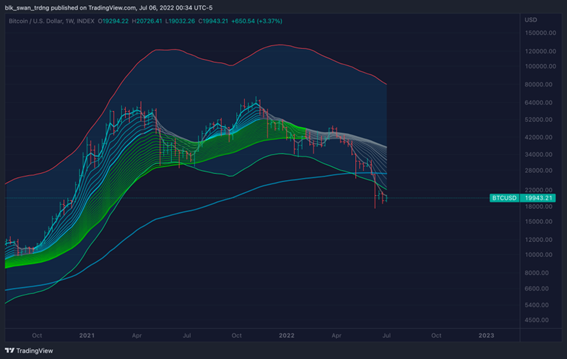 Another interesting chart to watch is the number of active addresses and entities, to see if they offer any hope or indication of where this market will be going. 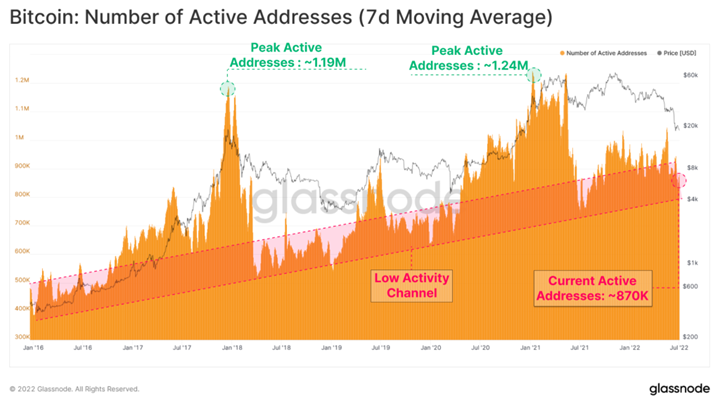 Above is the number of active Bitcoin addresses with a channel overlay. When we take this alongside the following chart, we get a rather interesting picture. A slowdown has definitely occurred in the crypto space, but it has not fully shaken retail’s will yet. Below is the number of active entities, and this tells a much different story. 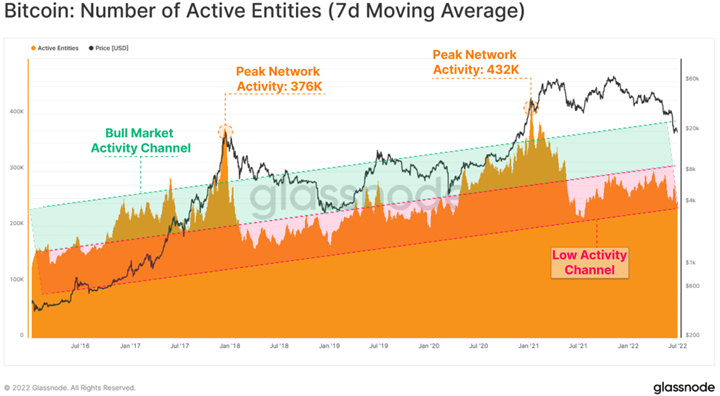 Entities have slowed WAY down, reaching an extreme of lower activity like we saw in 2019. I’d wager that this is primarily due to the recent blow ups of Celsius and other lending platforms that overlevered themselves above and beyond a rationally safe margin. With this in mind, though, I suspect some of these larger evangelists like Coinbase and Michael Saylor will get 3AC’d before we reach any new ATHs. The fact of the matter is that a majority of the crypto projects popularized this cycle (including Bitcoin) do NOT generate any real revenue. Importantly, projects that were built to facilitate the exchange of these non-revenue generating businesses have an outsized systemic risk should the projects they facilitate lose retail favor. This is the theme of all bear cycles: we need to separate the wheat from the chaff before we can really make bread.

There are a couple of areas however, that I am looking forward to in this next market cycle given our current market environment. The first is real world asset onboarding; projects like Goldfinch and Maple.Finance are onboarding real world assets and financial services to DeFi for regular investors to access. Goldfinch, for example, facilitates investing in frontier and developing markets that many retail (and professional) folk would otherwise have difficulty accessing on their own. Traditionally, it has been difficult to access frontier and developing markets in areas like Africa and South America without paying a specialist an arm and a leg.

The second is new technology that brings a missing piece to the Decentralized Finance space. Projects such as Sarcophagus, which is pioneering the first Dead Man’s Switch on the blockchain. For those of you who don't know what a dead man’s switch is, they are a safety mechanism that sets off a series of protocols should a particular action not occur. Take a subway operator for example, all subway trams have a dead man’s switch built into an operating lever that the operator must hold for the tram to stay in motion. Should his grip fail, the dead man’s switch activates, which will pull the train safely to a stop. This prevents a potential run away train should the operator suffer from a heart attack, for example. A simple yet innovative idea that decentralized finance can benefit from, especially since the issue with wallet keys is that if you forget them, (or you pass away unexpectedly), your assets become lost forever. With a dead man’s switch, one could potentially retrieve their keys if they built a particular protocol into their routine.

It's these types of projects, which seek to bridge the technological gap between online and real world, that I see taking us on our next leg higher. For now, however, it’s time to watch and see what the Fed brings up for July, and whether the media is correct in its belief that inflation has truly peaked.