If you’ve been tuned into the world of DeFi this year, there are a couple of emerging trends you may have picked up on. One narrative is innovations in bootstrapping Protocol Owned Liquidity (POL), and another is the use of NFTs as more than just profile pictures. We’ve covered protocols in both of these domains on Frogs Anon in the past, and now an old favorite has released a product that combines both narratives. Today we’re talking chicken - but don’t worry vegans, this isn’t the fried or BBQ’d type. We’re talking Chicken Bonds, an NFT-powered liquidity bootstrapping engine from the gigabrains at Liquity.

What Is A Chicken Bond?

As the name implies, CBs are a type of bond. Through a Liquity frontend, users are able to deposit LUSD to create a bond position, which is then represented by a unique, generative NFT.

The bonds have no maturity date, and they accrue yield over time in the form of bLUSD. At any point, bonders can either “chicken in,” claiming the bLUSD accrued in exchange for relinquishing the LUSD they initially bonded, or they can “chicken out,” terminating the bond and reclaiming the initial LUSD deposit, while forgoing the accumulated blUSD. The grand purpose of CBs is to provide users with an amplified yield opportunity for LUSD, while acquiring additional protocol owned liquidity for Liquity. Relatively simple on the surface, but there are a number of interesting facets to CB strategy, the mechanics of bLUSD, and the NFTs themselves that are worth exploring more deeply.

Today we’ll start by introducing the system, then follow up with a few strategies for how chicken bonds can be used.

Now, obviously the NFTs themselves aren’t the focal point of Chicken Bonds, but they do bear mentioning. They look fantastic, evolve based on the decisions bonders make, and are tradeable on marketplaces like LooksRare and X2Y2. Liquity’s signature attention to detail is on clear display in the aesthetic and unique designs, with animations for each evolution, and a plethora of trait combinations.

These evolutions correspond to bond holder activity. If the bonder chickens in, the egg transforms into a full fledged chicken. If they chicken out, it becomes a scared little chick. The chickens also have the ability to gain badges, as seen in the bottom corners above, which are earned via holder participation in the wider Liquity ecosystem. Having an open Liquity Trove, staking the LQTY token, and voting for LUSD pools on Curve will all earn unique badges for your chickened-in NFT. The dynamic nature and on-chain activity influenced traits of these NFTs are novel qualities when it comes to the integration of NFTs in DeFi, a big step forward that other projects will surely emulate in the future.

When selling an egg NFT, it’s important to keep in mind that you will be selling ownership of the underlying bond as well, so set the listing price accordingly. Overall, this is one of the best examples of an NFT that serves a legitimate financial purpose, but at the same time sacrifices nothing when it comes to flexibility.

So now we’ve talked about the pretty pictures, but strap in because this is where it gets technical. Here is an explanation on bLUSD, the token in which chicken bond yield is paid.

bLUSD(Boosted LUSD) is an ERC-20 token, separate from LUSD, which is backed by the Chicken Bond system’s Reserve. The Reserve consists of LUSD deposits from bonds, which is then deposited in either Liquity’s LUSD stability pool via B.Protocol or Curve’s LUSD/3CRV pool via Yearn Finance. Because bLUSD is backed in this way, it represents a proportional share of the Reserve. In other words, a holder redeeming 1% of current bLUSD supply would receive 1% of the Reserve.

When redeeming bLUSD, the holder will receive a mix of LUSD and yTokens (Yearn Curve LP tokens). Anyone can redeem bLUSD, but as the CB docs point out, this is only economically viable when the market price is less than the redemption value, an arbitrage opportunity that will likely be scooped up by bots. This arbitrage works to maintain a floor value for bLUSD, and market price should remain above this floor due to the enhanced future yield earned by bLUSD.

Enhanced yield? Yes, as the name implies, bLUSD earns yield at a superior rate to what would normally be earned by a standard LUSD deposit in the stability pool. The LUSD deposited in the CB system sits in three buckets:

Since the yield from each of these buckets goes into the reserve, this increases the backing for bLUSD beyond what normal LUSD + Stability Pool yield would be - hence the enhanced yield. The yield earned from both sources (Yearn Curve vault and Stability Pool) is auto-harvested and auto-compounded as well, maximizing the earning potential.

What does this mean for bonders?

The reserve system is set up to protect the principal of open bonds. Bonders can always chicken out and get their LUSD principal back, which is an excellent safety net to have available. Chicken outs also mean giving up the claim to accrued bLUSD yield, and that yield is effectively transferred over to future chicken ins. Chickening in provides an opportunity for increased yields, which prompts bonders to decide on the optimal time to do it.

The blue curve below shows the accrual schedule for bLUSD over a bond holding period, growing fast initially and slowing down as it approaches a cap. At some point along this curve the bonder reaches a break even point, where the market value of the accrued bLUSD equals their initial principal. Beyond this point it makes sense to chicken in, but given the diminishing returns, at some point it’s not worth waiting any more. 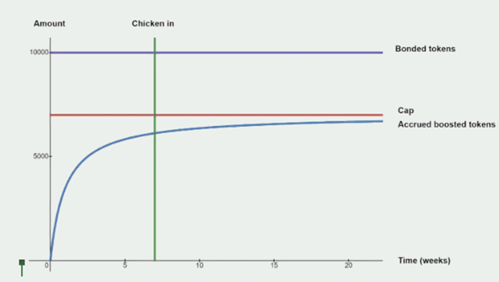 Given the aforementioned nature of bLUSD, there are several different strategies which can be employed, depending on the user’s goals and risk tolerance. Here are five ways to play bLUSD:

An issue that every DeFi protocol has faced at some point is how to efficiently grow liquidity for their token. Typically, this has meant offering temporary or diminishing rewards, often in the form of the native token, in order to attract liquidity providers for their pools. While this may work in the short term, it can lead to inflation of the token supply and attract so-called mercenary liquidity. As demonstrated with Liquity’s own utilization of Chicken Bonds, the amplified yield opportunity provided by the boosted token can drive protocol owned LUSD liquidity. As was covered earlier, the LUSD deposits from chickened-in bonds flow to the permanent protocol owned bucket. This system has also allowed Liquity to deepen the LUSD liquidity available on Curve, since it is used as a source of yield for deposited LUSD. 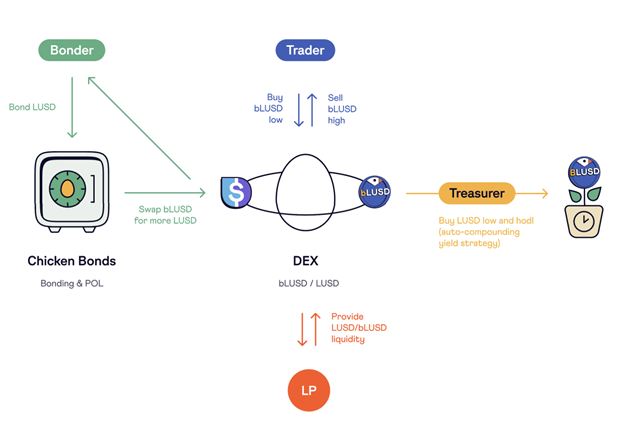 The plan is to roll CBs out to other protocols and DAOs starting around Q2 2023, allowing them to integrate this same system for their own native tokens, and acquire liquidity at no cost. If desired, protocols can also deploy some liquidity to further incentive their CB system. Creating a bond and never claiming it to boost yield, providing liquidity for the boosted token, and buying boosted tokens on the open market are all options for making a CB more attractive.

By design, bLUSD has a rising floor price due to reserve backing, making it relatively stable. This plus the fact that it is a yield bearing asset give it unique potential as collateral. The idea here is that borrowing against bLUSD means there is no risk of liquidation if that threshold is below the redemption price of bLUSD. This would allow the borrower to get a highly capital efficient loan, 100% LTV based on redemption price, and use the borrowed asset in another yield opportunity like stablecoin farming. Essentially this would provide access to leverage without liquidation risk, as bLUSD floor price is hard backed by the redemption mechanism and continually rising due to yield generation.

To give an example, an LUSD holder would create a bond, receiving an egg NFT representative of the bond and redeemable for bLUSD. They want to borrow another stablecoin for yield farming, so they would then take out a loan based on the redemption (floor) price of bLUSD (currently 1.06 LUSD) using the egg as collateral. This loan could be a high percentage of the value of the bLUSD claim underlying the bond, because if they end up defaulting the lender is protected by the floor price of bLUSD. The borrower would be protected from liquidation as well, since the value of their collateral is backstopped by the bLUSD floor.

Now let’s take a look at Chicken Bonds by the numbers and see what’s been going on since the launch in October. All figures are denominated in LUSD unless otherwise stated.

First off, the volume and user numbers have been quite solid, with over 1,700 bonds created in just 56 days since launch, with those bonds totaling over 62 million LUSD. Below, we can see bond sizes, and while there have been a good chunk of large bonds > 500k LUSD, the majority of bonds are 100k LUSD and under. This indicates that even though larger whales/funds/DAOs are using CBs, the bulk of volume is being driven by smaller DeFi users, a good sign for adoption and sustainability.

As for the bucket breakdown, we see here that the majority of funds are in pending bonds, as bonders figure out optimal timing for chickening in. The reserve bucket is filling up with yield from the pending bucket, currently sitting at 3.2 million, and the permanent bucket has accrued a respectable 550k in POL through chicken outs. 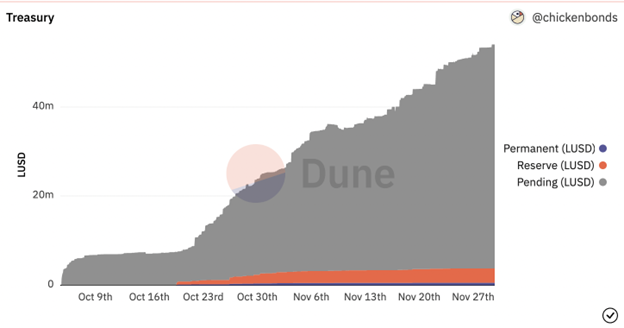 LUSD in the Chicken Bond Treasury

With nearly 53 million LUSD currently in the system, the treasury is generating a hefty amount of yield, which is driving growth in both market price and bLUSD floor price. With current yield levels, the floor price of 1.0606 LUSD is on pace to reach the current market price of 1.1603 LUSD in 60 days. The enhanced yield is no joke - investors would be hard pressed to find an equivalent yield opportunity that also offers a fully backed reserve.

Deepening liquidity on Curve is one of the primary goals Liquity has with their implementation of CBs, and so far both the LUSD 3CRV and bLUSD/LUSD pools are looking strong. Some of the bLUSD/LUSD growth can be attributed to the LP strategy described above, as well as LUSD 3CRV liquidity benefits from the portion of treasury LUSD deposited there to earn yield. This pool is also up for a Curve governance vote to be added to the gauge controller, a decision which if passed would help direct further liquidity to the pool.

What Liquity has done with Chicken bonds is one of the most useful DeFi innovations that we’ve seen in recent months, and its multifaceted design has a wide appeal. Whether it be investors looking for quality yield, protocols/DAOs bootstrapping liquidity, LPs, NFT collectors, arbitrageurs, and so on, there are a diversity of use cases and strategies for Chicken Bonds and bLUSD.

After fitting as much as possible into one report, I’ll leave you with all the resources used if you’d like to get some more granular detail on any aspect of the system and keep up with future developments.

This report was commissioned by Liquity and originally posted on the official Chicken Bonds website. You can view it there - and purchase a chicken bond yourself - by following this link.