NFT Liquidity Part One: An Introduction to the Playing Field

Liquidity giveth and liquidity taketh away. It’s a well-known adage that applies to virtually every asset class, and nowhere is this tidbit of market wisdom more pronounced than the NFT space. NFTs provide exposure to one of the highest beta and lowest liquidity assets in the space, and simple FUD or failure to impress artistically can see liquidity evaporate instantly, leading to a vicious cycle by front runners desperate to get out.

While platforms with first mover advantages have been able to capture the lion’s share of NFT volume to date, their product offerings are relatively limited, with the issue of deep liquidity still very much prevalent. This article attempts to provide a little background on the NFT space, some of the innovations it’s seen so far, and one protocol in particular that aims to solve the liquidity issue once and for all. Part one will focus on the history of NFT liquidity to date, and part two will detail the specifics of SudoSwap. 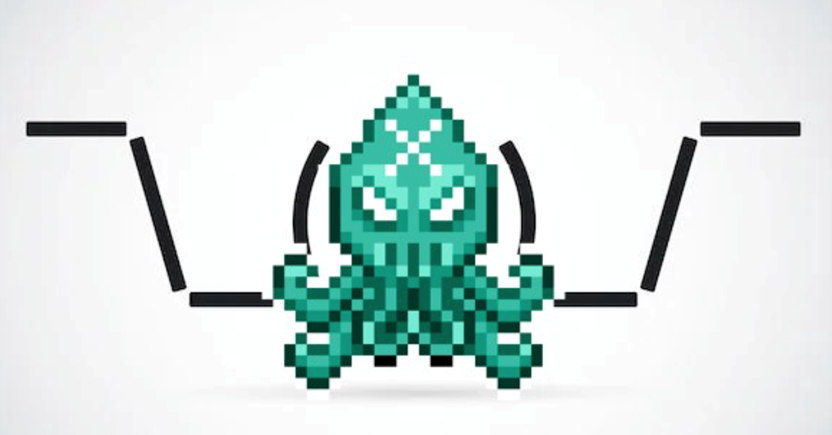 The Rise of NFTs

The NFT asset class, by and large, has taken many market participants by surprise. While simple in its value proposition and design (most NFTs are just JPEGs, after all), the NFT market has experienced a tidal wave of growth, drawing in non-native crypto users and DeFi veterans alike. 2021 could be seen as a pivotal year for NFT adoption, where user growth hopped off its slow and linear rise onto the exponential growth train (See Chart 1 – choo choo.)

The tides of adoption don’t seem to be slowing down either, as the number of users and weekly transactions remains strong even as floor prices fall in the bearish environment. Popular collections continue to find their way into mainstream media and culture, crystalizing themselves as a unique asset class with both tangible and intangible characteristics. Tangible, in the sense of utility provided through various benefits such as future airdrops and high USD sale prices. Intangibles such as community and connections, as well as the feeling of exclusivity and scarcity.

Through the ebbs and flows of normal market conditions, the NFT market has continued to garner a significant amount of volume and interest, continually pushing its total market capitalization to new heights (Chart 2). In its current state, the NFT market sits at a lofty $20 Billion market cap, seeing daily flows of over $ 1 Billion in times of euphoria and new project launches. While this may seem inflated, in the grand scheme of things it is still quite small as the broader crypto market cap sits north of $1 Trillion.

As a function of its dominance and awareness among users, the majority of NFT volume has taken place on Ethereum (Chart 3). This should come as no surprise as NFTs themselves were catalyzed on Ethereum through the ERC-721 standard (standard for representing ownership of non-fungible tokens, i.e., NFTs).

Drilling down even further, we can see that the NFT landscape is dominated by two marketplaces, LooksRare and OpenSea. These 2 marketplaces account for almost 100% of all NFT volume on Ethereum and a significant amount of total NFT volume across all chains (Chart 4). 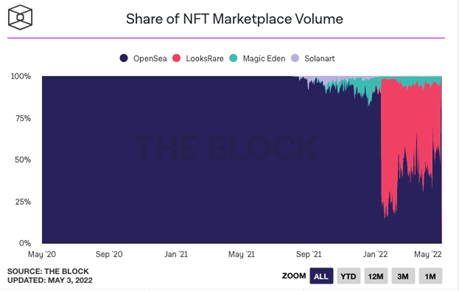 OpenSea, with its first mover’s advantage, was able to capture virtually all of the NFT marketplace volume by simply providing a platform for users to list, bid, and sell NFTs. For those of you who have used OpenSea before, you will have become accustomed to its rather rigid mechanics, high fees, and limited functionality. Navigating OpenSea is a tedious process and can be quite expensive at times of high network usage.

LooksRare on the other hand, has been able to gain material market share since its launch. The primary driver behind its rapid adoption has been user rewards for utilizing its platform, offering a kickback in the form of LOOKS tokens for the facilitation of trades. Crazy to think that a simple product offering, with limited actual technical improvements (LOOKS is simply a governance token), has been able to drive down OpenSea’s market share meaningfully. This merely reinforces the importance of constant innovation and expansion as incumbents become quickly crowded out for failure to adapt.

Innovation moves at lightning speed in crypto. You take one week off and realize you have fallen significantly behind the learning curve as new protocols launch with jargon you have never even heard of. Innovation among NFT platforms on the other hand hasn’t moved quite as fast due to the exuberant privileges dominant platforms hold via their moat and user bases, making it harder for newer protocols to gain traction. NFTfi, Gem.xyz, and Sudoswap are some examples of notable movers in the NFT space, each offering unique and value additive mechanics to the NFT space.

NFTfi, as one of the first innovative movers in the NFT space, launched a simple marketplace that allows users to take loans out against their NFTs. Essentially, the protocol allows NFT holders to access liquidity for their JPEGs via peer-to-peer loans. Users simply list the asset of their choosing and receive various loan offers from interested parties. The NFT itself is held in escrow until the loan matures. If the borrower fails to repay the lender, the lender takes possession of the NFT. Giving NFT holders access to liquidity unlocked a new vertical within the space and has seen tremendous success so far (Charts 5 and 6). 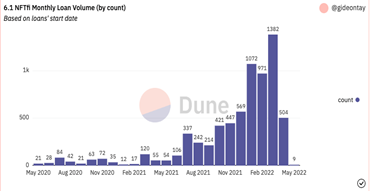 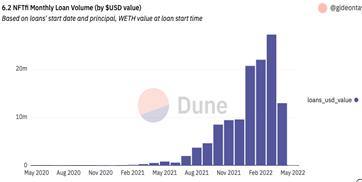 Gem.xyz is another protocol that has seen success since launch. The platform itself is essentially an NFT aggregator, listing collections from multiple marketplaces in one place. It also gives users the ability to make bulk purchases across multiple exchanges in a single transaction, saving a hefty load of gas fees. A simple but innovative addition to the nascent and fragmented NFT space. The platform’s popularity among users has caught the attention of larger players, with OpenSea deciding to acquire Gem.xyz rather than build out the same functions for itself.

Sudoswap is another digital marketplace that offers zero-fee OTC trades/swaps for NFTs. In layman’s terms, users can trade individual or bundles of NFTs for other NFTs while avoiding the marketplace fees one would experience if they sold on OpenSea. Sudoswap, in its current form, has been able to generate meaningful volume through its platform as NFT users find value in its services, garnering nearly $1m in trade volume on average (Charts 7 and 8). 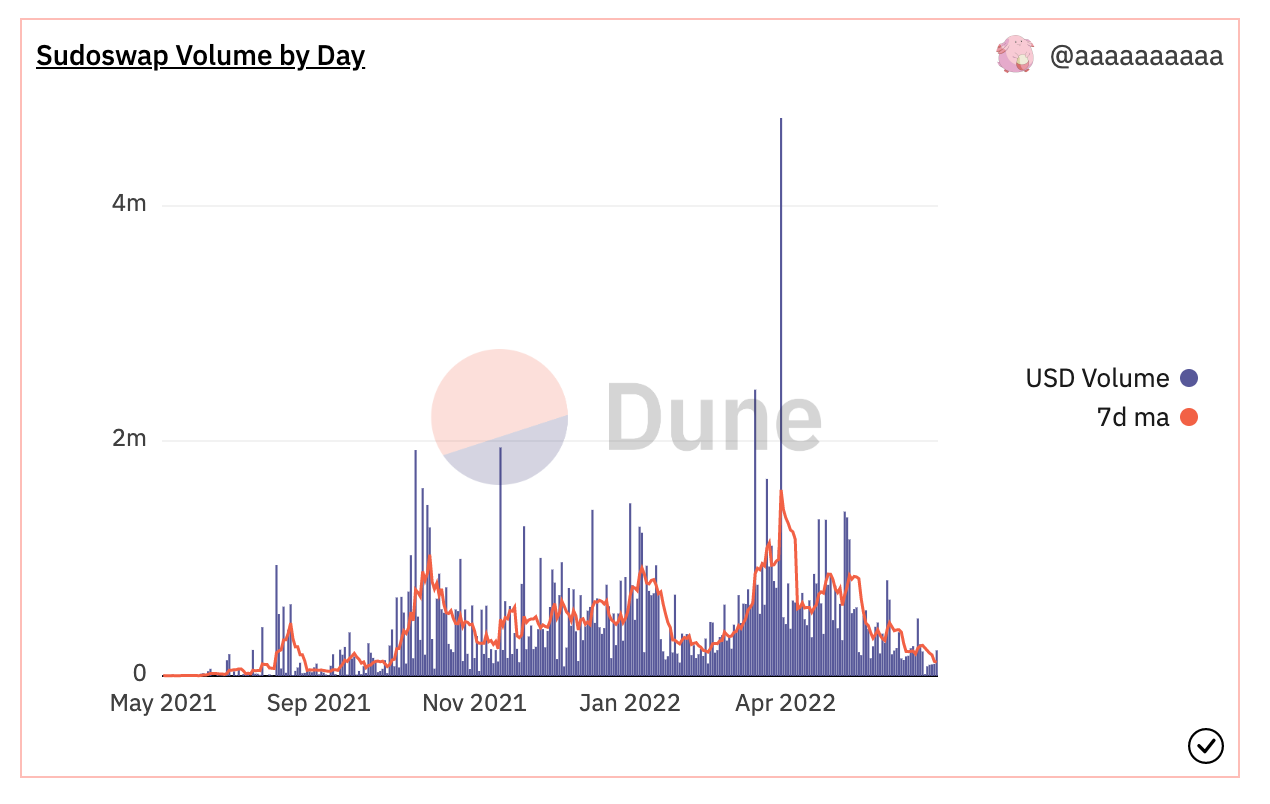 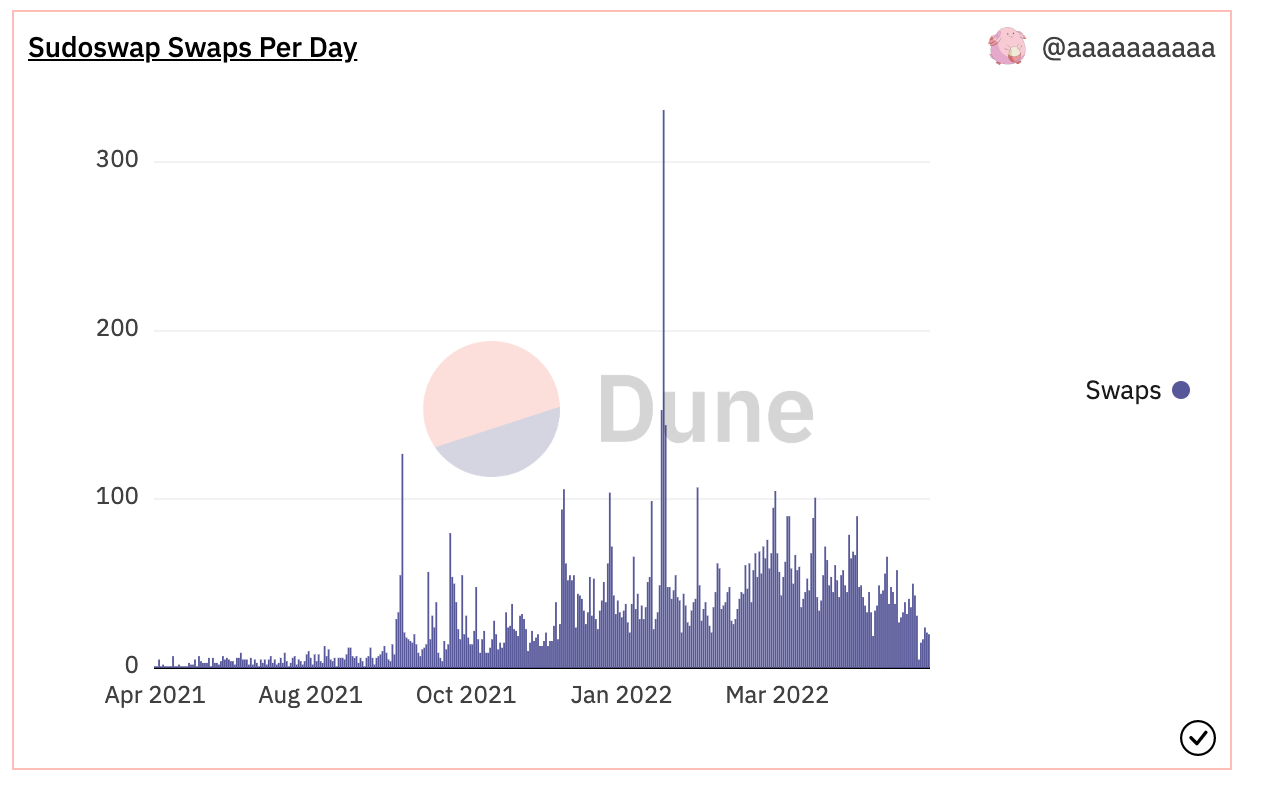 Tying it all Back

The NFT space, in its current state, still only represents a small fraction of the broader crypto market despite the fact that it has arguably experienced the most significant growth in recent months (2% of total crypto marketcap). Developers that look to test the boundaries and offer new features to NFT participants have seen great success and adoption so far. The space, however, is still plagued by fragmented liquidity as multiple venues compete with one another.

Another area of major concern in the space is the rather illiquid nature of the JPEGs themselves as it’s a P2P market. Your NFT is only worth what the next person is willing to pay. This may be a mental roadblock for many that are more active within the community. Conventional DeFi traders can simply smash a market sell button and instantly exit their position, rather than watch their cute, animated JPEGs hopelessly crash to zero as they fail to catch a bid. Platforms that have unlocked new facets for NFTs (gasless OTC swaps, leverage via NFT loans) have seen tremendous success as they open up new possibilities for what can be done with an NFT.

Liquidity, however, is still a major issue. Let’s look into it in part two…