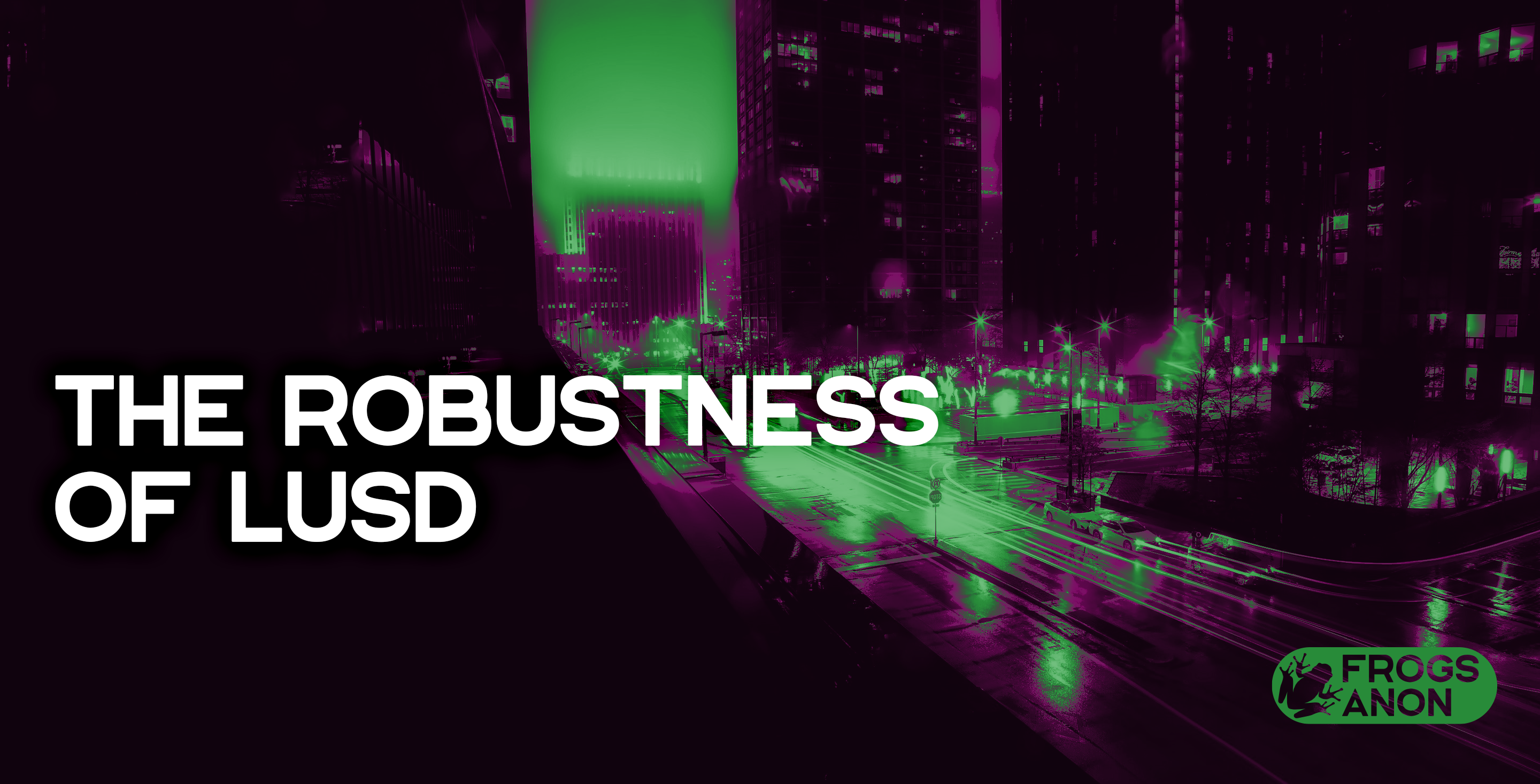 The Robustness of LUSD

What is a stablecoin? The word gets tossed around a lot in this space, and many projects out there claim to offer “stable” coins pegged to the U.S. dollar or some other underlying asset. In Liquity's case, a stablecoin essentially means a token (LUSD) with the constant ability to redeem 1 LUSD for $1 worth of ETH.

Now you might be asking, “How can you have a stablecoin that’s backed by such a volatile asset? The answer is multifaceted, involving arbitrage, floating borrow and redemption fees, and prioritized repayment of at-risk Troves (Liquity’s terminology for a Collateralized Debt Position.) There have been some spectacular failures in the history of stablecoin experiments, but LUSD’s design is well thought out, incentivizing low volatility and solvency over scalability. Let’s take a look under the hood at LUSD, how it drives Liquity’s CDP platform, and its uses across DeFi.

The core principle of LUSD is that you can always redeem it for $1 worth of ETH, whether ETH is at $100 or $10,000. New LUSD is only created when ETH is deposited into a Liquity trove to be borrowed against, and it is only burnt when being redeemed for ETH. Since new LUSD can’t just be created arbitrarily, volatility is mainly introduced by large redemption volumes and large borrow volumes.

One mechanism Liquity employs to discourage these actions and keep a healthy balance is a floating fee structure, which ranges between .5% and 5% percent for borrowers. The redemption fee begins at .5%, but has no cap.

These rates depends on the expansions and contractions of LUSD supply, with the basic principle being higher redemption fees when LUSD is above its peg, and higher borrowing fees when below the peg. This rate decays over time as redemption volumes slow down in order to maintain favorable fee levels for users. This is also one of the main sources of revenue on the protocol, which is ultimately earned by stakers of LQTY, the protocol’s non-pegged token.

The next mechanism in place is the pure arbitrage opportunity presented by LUSD’s constant redemption value of $1 worth of ETH. As LUSD price falls below peg, it becomes increasingly profitable to buy and exchange for ETH. This makes the peg quite hard when it comes to the downside, and so far has been able to recover quickly in instances where price dips below $1.

However, this doesn’t have exactly the same effect in the other direction. If LUSD price is over $1 then the arbitrage profit move would be to borrow LUSD and then sell it, possibly for another stablecoin that is more closely holding its peg at the time. Due to the fact that LUSD is 110% overcollateralized, it has often traded slightly above $1 for extended periods of time. It should never really go above $1.10, though, since that would exceed the collateral backing available for redemption.

Incentives of the Peg Mechanism

In addition to maintaining the peg, Liquity also built its platform to minimize insolvency risks. Key components here are the redemption and liquidation mechanisms for troves and the Stability Pool, which basically absorbs LUSD losses from liquidated troves.

First up, redemptions. These work differently from paying back a loan you’ve taken out. When you redeem LUSD for ETH you are actually paying off the debt of the riskiest troves, in exchange for an equal amount of the trove’s ETH collateral. Users can redeem LUSD for ETH at any time without any size restrictions, but the aforementioned floating redemption fee will dictate the cost of the transaction.

The riskiets troves - those closest to the 110% collateral ratio - are the first to be redeemed against. Owners of the affected troves don’t incur any losses, but their ETH exposure is reduced by the same amount that their loan was effectively paid back for them. If users wish to avoid being redeemed against then all they have to do is maintain enough collateral to put them comfortably above the riskiest troves.

In the case of a trove’s collateral ratio falling below the 110% minimum, it is then eligible for liquidation, which can be performed by anyone. Initiating the liquidation will require a liquidator to cover gas costs, so to compensate for this they receive 200 LUSD and 0.5% of the collateral that was liquidated, making it a profitable activity.

The remainder of the liquidated ETH goes to the Stability pool, which makes it an excellent option for sneakily scooping up ETH exposure during dips when liquidations are high. Basically, LUSD holders can deposit into the Stability pool and provide liquidity for troves to be liquidated. If you like cheap ETH exposure, there’s arguably no better way to get it than from this pool, which essentially buys ETH at a 10% discount every time someone is liquidated. As you can see in the chart below, the Stability pool APR’s spike up during large sell offs like we experienced earlier this summer. 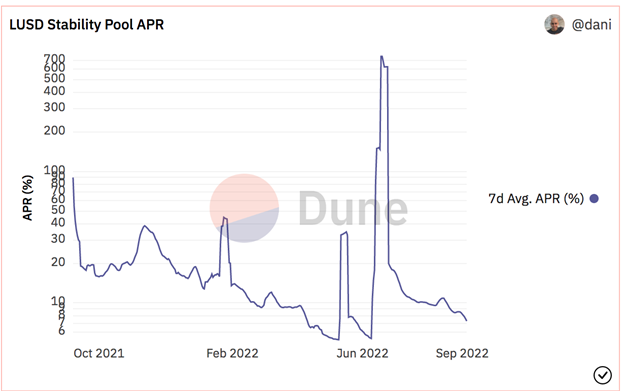 Now that the finer points of LUSD have been fleshed out, let’s take a look at the other aspects of Liquity that make it unique and drive demand for its stablecoin. One design choice that stands out in particular is the absence of a governance mechanism. In fact, the entire protocol is immutable, with all parameters such as minimum debt, collateral ratio, and LUSD redemption value set in stone since the contract was deployed to Ethereum Mainnet back in April 2021. No governance may seem weird at first since we’re all so used to DeFi protocols being controlled by their users, but governance does introduce some liabilities (remember the Beanstalk flash loan attack earlier this year?). Ultimately, for a protocol that was built with the sole purpose of providing capital efficient loans to ETH holders, leaving governance out was probably the right call.

Speaking of capital efficiency, Liquity allows users to borrow up to 90% of their collateral value, a minimum collateral ratio (MCR) that is significantly more favorable for borrowers than the 66% offered by MakerDAO. Furthermore, MakerDAO lends DAI out with a variable interest rate, making longer term borrowing more costly. Liquity on the other hand is able to offer 0% interest loans, on account of its single asset backing and the aforementioned borrow/redemption fee structure. Interest is quite important to consider when opening a CDP, especially when using one to get stablecoins for yield farming, since you’ll likely be locking up those stables for some period of time and Liquity’s 0% interest fees could save users a significant amount.

LUSD also stands out among its stablecoin peers for its decentralization, as competitors like USDC and USDT both rely on control by centralized entities rather than pure code. DAI partially falls victim to this as well since a large portion of its backing consists of centralized assets as well. The issue here is that a controlling entity such as USDC’s Circle could freeze assets unpredictably, and have been known to ban specific addresses from using their stablecoins. With no governance or centralized entities involved LUSD can’t be censored, embodying the ethos behind Ethereum and the DeFi movement.

An ETH backed stablecoin serves many purposes within DeFi, allowing users to lever up on ETH, enabling stablecoin liquidity in other protocols, and acting as a safe and decentralized option for treasuries to store and grow their balance. DAO’s such as Olympus and DxDAO employ LUSD treasury strategies, and LUSD plays a large role in decentralized exchanges such as Curve and Velodrome. Other protocols are using LUSD to back their own stablecoins as well, with Synthetix’s sUSD being a prime example. Back in late 2021 they passed a proposal to phase out the use of DAI as a backing for sUSD in favor of LUSD, citing the censorship risks associated with DAI’s USDC reliance. For another example of LUSD adoption let’s look at Fei, which bought 100 million LUSD for its treasury, in order to diversify the backing for its own stablecoin.

It’s almost like ETH backed stables could be considered a reserve currency for Ethereum based DeFi treasuries, a similar dynamic to the fiat currency system where foriegn treasuries often opt to hold US dollars for their dependable backing. Vitalik Buterin himself explored the merits of different stablecoin designs in a May 2022 blog post. He used RAI, a similar ETH backed stable, as an example of “an ideal type of collateralized automated stablecoin.” I’d highly recommend giving it a read as he offers two valuable thought experiments on the potential risks of different flavors of stablecoins.

LUSD is one of the more robust stablecoins on the market today. Its design choices are geared towards solvency and low volatility, filling an essential role in the Ethereum ecosystem. While it does sacrifice some scalability to achieve this, many DeFi users and protocols are recognizing the benefits of this tradeoff and opting to use LUSD instead of fiat backed stables. Liquity as a whole is a powerful tool for Ethereum users, offering some of the most favorable terms for borrowing and well designed incentives for holding/staking LUSD. Its integrations across DeFi protocols provide a range of yield earning options, and the Stability Pool offers a unique opportunity to pick up cheap ETH during liquidation events. With the recent market volatility and concerns around censorship it’s not hard to see why Liquity and its stablecoin would be a top choice for DeFi users and protocols that value stability and decentralization.