In TradFi, bonds and other fixed income products provide investors with access to a more stable portion of their portfolio with which they can collect regular interest payments, offset market risk, and diversify their asset holdings. In this article, we’ll look at Timeless Finance, an early-stage protocol that lets on-chain degens accomplish the same goals using a suite of USD and ETH-based yield derivatives.

Their main offering is known as a perpetual yield token. While comparable protocols offer vaulted products with tradeable yields, or zero-coupon tokens [1] that come to maturity at a particular date, Timeless’s solution has advantages over both in terms of liquidity and composability. Using Timeless, investors can create and speculate in novel markets for defi interest rates, hedging yield if they have a good rate, boosting yield rates if they believe catalysts will cause an uptick in defi interest, and trading yield markets in all environments.

Let’s take a look under the hood.

The chief offerings of Timeless are Perpetual Yield Tokens (PYT) and Negative Yield Tokens (NYT), which can be produced from any asset with an ERC-4626 token or a Yearn v2 vault. Users simply deposit a yield-bearing asset (for instance, 1 USDC in a Yearn vault, yvUSDC) and receive two tokens in return: yvUSDC-pyt and yvUSDC-nyt.

Of these, the PYT token provides a perpetual (unlimited) claim on the yield of the underlying token, while the NYT provides an inverse of the value of PYT. The value of these two tokens will both change, but the two of them combined will always amount to 1. 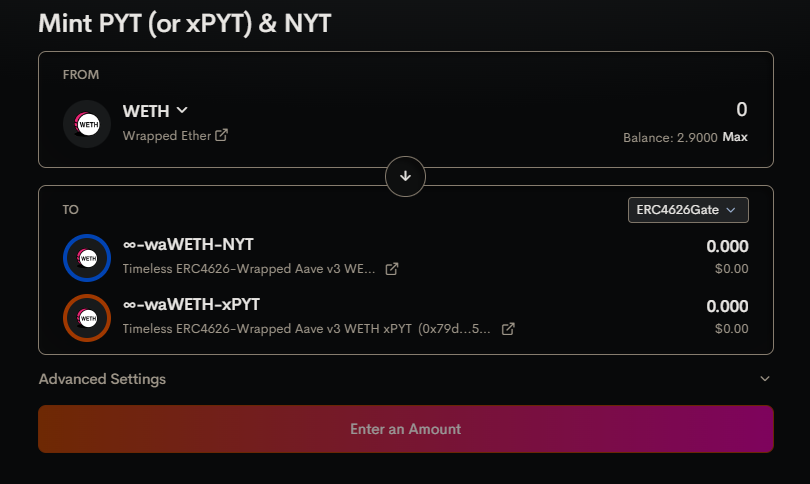 You can sense the basic idea: that as on-chain yield rates fluctuate, so will the prices of PYT and NYT. Traders can then buy or sell one or the other, allowing them to go long or short on yield rates. This opens up a number of potential use cases, including but not limited to compounding the yield per dollar value of a given asset. Users can also LP between the two tokens. At the moment, “yield” from these LPs is paid in a worthless Timeless Test Token (TTT) for the sole purpose of testing the LP functionality, but circumstances may change as platform fees rise over time.

Later on, we will explore the implications of these use cases and whether or not they are successfully provided for by the protocol.

In practice, this means that (taking a USDC vault as example), the USDC PYT will always be worth 0.5−1,whiletheUSDCNYTwillbeworthfrom0-0.5. So what does this mean for each token? PYT, due to its lower volatility and yield stream, is good for yield boosting, but is less sensitive to yield rate changes. Conversely, NYT is useful for yield speculation as the higher volatility makes it more capital efficient to short NYT than long PYT should a user want to short rates.

Of course, without a collateralized lending or trading layer for NYT tokens, it is impossible to “short” NYT at all, but the structure of Timeless explicitly does not prevent an individual or group from building a platform and set of contracts to support this.

The final token that must be covered, for the sake of completeness, is the auto-compounding token xPYT, a wrapped version of PYT that periodically auto-sells principal yield to PYT to add it to the xPYT position. It is also worth noting that PYT yield accrues to a specific address and must be claimed by that address – therefore PYT must be “supported” by any integrating dapps before yield can actually be captured. xPYT requires no such manual integration.

Various protocols have been developed in the past for trading, hedging, and speculating on DeFi yield rates, but the mechanics of Timeless differ in a number of important ways. For one, most systems that involve vaulted assets are time-based. A certain number of tokens are locked in a vault for a certain period of time, and the yield tokens for that particular time period are released to be traded on-market. This approximates how yield is traded in TradFi through instruments like bonds, but it presents DeFi traders with a number of issues.

First, the use of separate time-based vaults causes liquidity fragmentation, both amongst different protocols and amongst different vaults within the same protocol. In many of these protocols, if you deposit tokens into a December pool, you will only be able to sell your tokens back to the LP pool dealing in December yield tokens. Some protocols attempt to mitigate this by offering only one rolling term (for instance, September yearly vaults that roll over once the maturity date is reached), but this complicates the issue of hedging yield around unlock times and needing to re-enter vaults with potentially different liquidity constraints (due to the aforementioned fragmentation).

Another issue is composability. Most of these time-vaulted products employ incompatible tokens, which makes composability between different protocols nearly impossible. For instance, the principal tokens used by Element, Pendle, and APWine are all different – in Element they are known as eP tokens, in Pendle they are ownership tokens (OT), and in APWine they are principal tokens (PT).

On top of this, vaulted assets with different maturity dates are represented by different types of yield tokens, which ensures considerable friction with any protocol attempting to build on top of these token types (for instance, a lending market trying to accept yield token positions as a form of collateral).

The Merge and an Ethereum Risk-Free Rate

There is a glaring problem with current yield markets in DeFi: yields priced in USD are essentially a product of demand for leverage. Yields were high in 2021 because 1) retail could be convinced that their high-APY governance shitcoin wasn’t going to zero, and 2) gamblers such as ourselves would submit their cryptoassets as collateral on CEX and DeFi lending platforms, pulling out USD-pegged tokens to leverage spot or farm the ridiculous yields that were prevalent on many new or untested protocols.

With the bull market, yield farming was simple due to the abundance of entities willing to pay you yield for the time-cost of your assets. Simply put, the time value of your assets was worth more last year, when those assets were also worth more and liquidity in DeFi protocols was higher. With the reduction of on-chain speculation, entities seeking risk-free return on their assets are forced to look for different sources of yield. This matters for the rest of us because there is a very real possibility that the way we think of “yield” on-chain may soon be changing.

Denominating in USD and opting for farming stablecoin yields, although a “safer” strategy, generally results in long-term underperformance against a portfolio that holds spot ETH. However, existing sources of yield on an eth-denominated portfolio are few and highly risky. If traders wish to increase their share of the network in ETH terms, they are required to either resort to timing the dumps in the market, trading lowcaps and shitcoins, or getting lucky minting the next Digidaigaku.

However, this paradigm may be significantly disrupted with the monumental change in ETH validation scheduled to happen sometime next month: the Merge. The Merge will not only shift Ethereum’s validation mechanism from Proof of Work to Proof of Stake, but it will also transition ETH to a fully productive asset that can be staked to validate blocks and secure the chain. ETH’s transition to yield-bearing nature will involve a shift of consciousness. Instead of being forced to speculate on yield rates acting as essentially a tracker of market sentiment, eth-denominated traders can now benefit from a risk-free yield rate of ETH.

In TradFi, the yield on a 3-month Treasury bill is known as the “risk-free rate”, as in, it is the amount of yield that one can expect on idle money one would wish to outperform if placing it into risk assets such as stocks or commodities. The risk-free rate is set by the market at US treasury auctions, with the secondary market for US debt being one of the largest and most liquid on earth. As of April 2022, the market cap for US treasury-issued securities was $23.3 trillion. The risk-free rate moves up and down in relation to how risk-on the market is, but also provides asset managers with a reliably stable yield in their portfolio.

The merge is especially significant, therefore, as it provides ETH-denominated asset managers with a “risk-free rate” that they must either outperform or choose to allocate into, essentially unlocking the equivalent of this multi-trillion-dollar TradFi asset class for crypto. Different models for ETH staking provide different estimates on this risk-free rate, but typically ETH staking is estimated to be in the realm of 5-7% APR, denominated in ETH. This allows traders to maintain their max long position while also safely denominating in one of the best performing assets of the past decade, and compounding a risk-free rate on their holdings.

Timeless, then, is shaping up to potentially seize massive market share with a momentous transition on the horizon for the Ethereum network. One of the largest markets in TradFi has so far seen underwhelming adoption in the DeFi space. With the supplementation of additional yield opportunities and the implementation of a global risk-free rate for ETH-denominated traders, the potential use cases for an effective and composable yield market protocol can only grow. 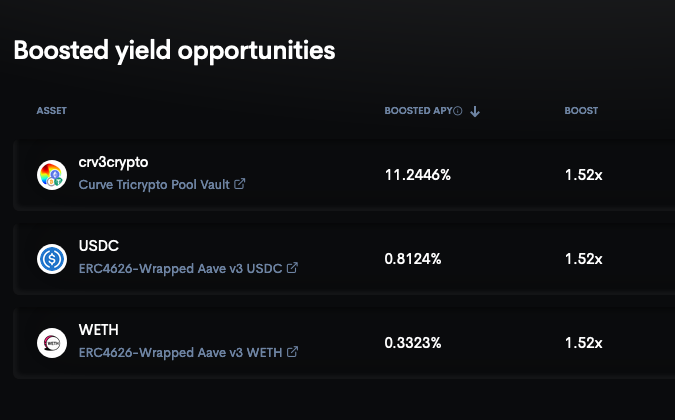 Crypto Twitter has seen considerable debate over the exact pricing of Timeless products, and I hope this article has meaningfully contributed to the discussion. Clearly with the composability and innovation that Timeless provides, there is far more to be built on top of the protocol before its vision is fully realized. The next few years in DeFi likely bring legal disputes and regulation, but undeniable opportunities await the next wave of adventurous degens. See you on the other side.

[1] Zero-coupon bond/token – a token that guarantees redemption of a principal after a certain period of time, but does not pay interest