This is a two part series on innovative projects at the intersection of NFTs and DeFi. The first covered Abacus.wtf, a novel solution for appraising NFT values, and you can view it here. Today we’ll do a deep dive on nftperp, an upcoming DEX where NFT derivatives can be traded. Let’s take a look…

Usually you can’t judge a protocol by it’s name alone, but with nftperp you basically get the whole picture right off the bat. While it’s still in the demo phase, once this project goes live on Arbitrum, you will be able to trade perpetual futures contracts for top NFT collections using ETH collateral. It's a chance to short a previously un-shortable asset class, which is an NFT hater's dream come true. The possibilities don’t end there, though.

Imagine you own a blue-chip JPEG and are up a considerable amount on your investment. Rather than selling, you can now use a perp to protect your gains, retaining access to the community while creating a delta neutral hedge. In addition to hedging long term holds, this method could also be used for a delta neutral airdrop farming strategy, as blue chip NFTs are well known for rewarding holders with drops and priority minting privileges.

Flippers and active traders will realize benefits from perps as well, as nftperp’s minimal 0.3% transaction fees will allow them to sidestep the marketplace and royalty fees that eat into their profit when exiting traditional NFT purchases. For a protocol with so many potential users and use cases, nftperp has definitely been flying under the radar.

Set to go live later this year, nftperp will initially support a handful of blue-chip projects. The demo version currently includes BAYC, MAYC, Moonbirds, Doodles, and Clonex. While the vast majority of traders are priced out of these collections due to the double-digit ETH floors, nftperp allows anyone to create a position with as little or as much ETH collateral as they wish, opening up blue chip NFT exposure to the masses. For all you true degens out there, the platform also offers up to 5x leverage, which will of course be risky given the notorious volatility of NFTs. However, the pricing mechanism does take some steps to smooth things out, which we’ll look at next. 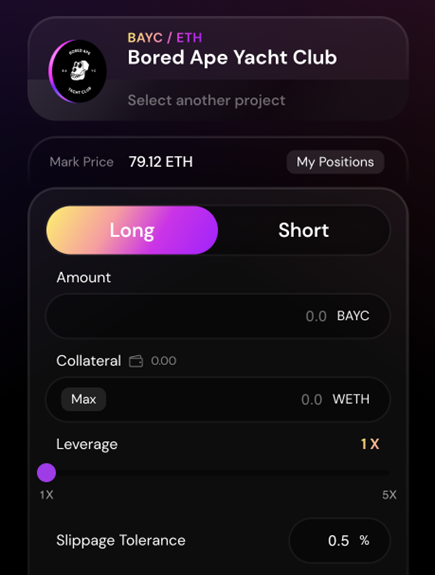 Prices on nftperp are based on the floor price of a collection, using Chainlink oracles for price feeds. Outliers and price manipulation is filtered out using advanced metrics from Upshot, a fellow newcomer to NFT finance. Once sales are filtered down to meet data eligibility requirements, the five lowest most recent sales are averaged to create what the protocol refers to as “true floor price,” which is then TWAP’d and used to calculate funding payments between longs and shorts.

These funding payments occur every 8 hours for everyone that holds an open position at that time, functioning in the same manner as other perp platforms where longs pay shorts if the quote price is above the true floor price, and vice versa.

As for the quote prices, those are determined by a virtual AMM bonding curve, a mechanism pioneered by Perpetual Protocol that maintains solvency without the need for a liquidity pool. Instead, collateral from positions is stored in a smart contract vault, within which all PnL is settled. Essentially, one trader’s gains are another trader’s losses in a vAMM.

While vAMMs employ the same constant product formula (xy=k) as standard AMMs, nftperp has made some adjustments to reduce mark price deviation and slippage in certain scenarios. Their dynamic bonding curve, inspired by popular Solana perps protocol Drift, allows for k to contract and expand based on the amount of open interest, and automatically adjusts mark prices with that deviate significantly by adding a convergence event multiplier. These implementations aim to keep trade execution in the middle of the bonding curve for low slippage.

Nobody likes getting liquidated, but that is a risk you take when you decide to lever up on a monkey JPEG. Thankfully, nftperp offers some cushion, with liquidations occurring in two steps. The first is a partial liquidation, 25% of collateral, when a trader’s margin ratio falls below 6.25%, then in the absence of margin maintenance a complete liquidation at 2.5% margin ratio. Liquidations are conducted by keeper bots, which earn 1.25% of the notional position size at liquidation, with the remainder going into the protocol’s insurance fund.

The insurance fund is used to offset unexpected losses from liquidations and is also filled by half of the protocol’s .3% transaction fee intake. The other half of transaction fees are evenly split between nftperp token staking rewards and a fund for covering convergence event costs. While base fees are set at .3% this number also scales dynamically with mark price deviations to incentivize balance between shorts and longs. As far as tokenomics and staking details go there isn’t much information currently available besides a mention in the docs that stakers will earn a portion of trading fees.

It’s not hard to see the crazy potential of a protocol like this, as the overall crypto derivatives market traded over $3 Trillion in volume during July alone. On top of that, Arbitrum has already seen an influx of perps volume as of late with GMX, as you can see on the open interest chart below. Not only does nftperp appeal to smaller NFT traders and degens, it has legitimate utility for whales and potentially even institutional investors who decide to branch out into NFTs. With a functioning MVP, a solid roadmap including perp staples like stop losses and limit orders, and scheduled audits, expectations are high for nftperp, and I’m looking forward to its debut. 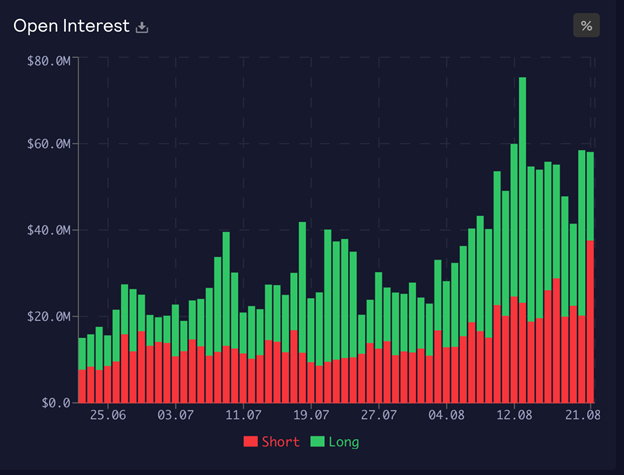 Now that you’ve got an idea of what’s to come in the world of NFT finance, I want to zoom out to the entirety of DeFi and the wider crypto landscape. NFTs in their current stage are mainly a means of artistic expression and online community building, and let’s be honest, an aesthetic piece of art or cool pfp appeals to a wider audience than obscure DeFi protocols do. With finance becoming more integrated into NFTs, more and more JPEG enjoyers will be exposed to the possibilities and benefits DeFi has to offer. This increase in composability between different sectors of blockchain tech will speed up adoption and spur further innovation, bringing the future of finance closer to reality. NFT finance is a big part of the narrative during this 2022 bear/builder’s market, and nftperp and Abacus are here to continue pushing the boundaries of what’s possible with JPEGs.